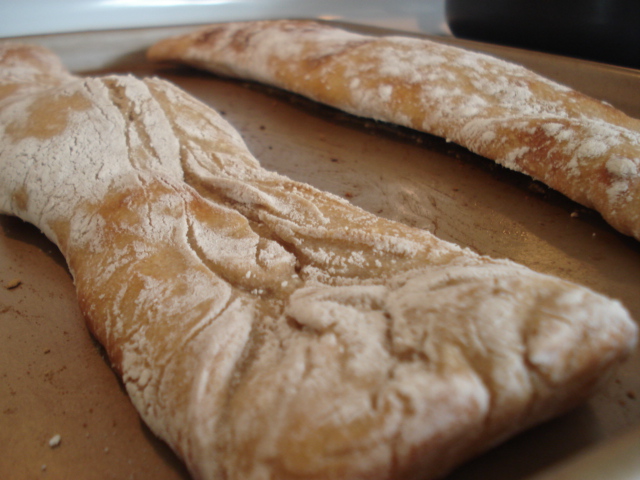 So with all this baking going on, I decided it was time to try my hand at that king of breads, sourdough. I want this page to be as instructional as possible, so let me know if anything is unclear. I should mention, though, that I’m no expert at this (yet!), but I wanted to share the knowledge I’ve picked up and my own experience for your benefit as well as mine. Most of my information comes from my two favorite baking books, plus some Wikipediaing (taking the internet with a grain of salt as always), and this great website, Sourdough Home run by Mike. I had a couple email exchanges with Mike and he was very knowledgeable and helpful. I will echo his sentiments that sourdough is not the place to start if you want to get into bread making, but I think that anyone with a passion for bread will probably end up trying it one day.

What the heck is sourdough, anyway?

Sourdough is bread made from a sourdough starter and has quite a unique flavor. What’s a starter, you ask? A starter is a living culture of wild yeast developed by the baker for 1) use in leavening breads and 2) lending that unique sour flavor to the bread. It has four main components of interest to the baker:

Water – Well we gotta have a medium for all this to occur in. Not much to say here, except that considering we’re actually trying to grow a colony of microorganisms and bacteria, you probably don’t want to use your tap water if it is heavily chlorinated water (i.e., designed to kill microorganisms) or distilled water (which has nothing of nutritional benefit to the yeast).
Flour – Besides providing food for the yeast, this is where the yeast mostly comes from. In one gram of flour, there are thousands of yeast cells (especially in organic flour). Compare this to one gram of commercial yeast, which has millions (billions?) of yeast cells. More on flour later.

Yeast – The baker’s best friend. As most people know, yeast consumes simple sugars for energy, excreting alcohol and carbon dioxide. Given time yeast will multiply, so long as there is sufficient food and agreeable temperatures. Now, we always talk about flour and bread as being complex carbohydrates, yet I just said that yeast consume simple carbs. Well what is happening there? There’s an enzyme in flour called amylase that breaks the complex carbs in flour down into their various simple sugars, some of which the yeast can eat.

Lactobacilli – These are a form of bacteria that establish a wonderful symbiotic relationship with the yeast. The yeast can’t eat all the types of sugar produced when amylase does its thing, and lactobacillus is there to eat the rest. The side effect of this is the production of various acids – lactic acid, and acetic acid. This is of interest to the baker for many reasons, the most important being the decrease in pH (meaning higher acidity). The yeast can tolerate higher acidity, but other harmful microorganisms cannot. As a result, our yeast culture grows in a safe environment, and the culture develops a slightly acidic, or SOUR taste!

So how do we make a starter?

Well this was my first attempt at this kind of thing, and while it seems to have worked perfectly, I’m not going to pretend I’m an expert at it yet. Nevertheless I want to share my process in detail and hopefully you’ll learn something or be inspired to try it yourself. The goal here is to create an environment favorable to to the growth of the yeast and lactobacilli, and then once that occurs, keep feeding them until the flavor has ripened. To do this, we simply combine a few ingredients, leave it at a warm temperature, and occasionally feed it more flour. It takes at least 5 days or so, but up to 8 ensures a balanced flavor. 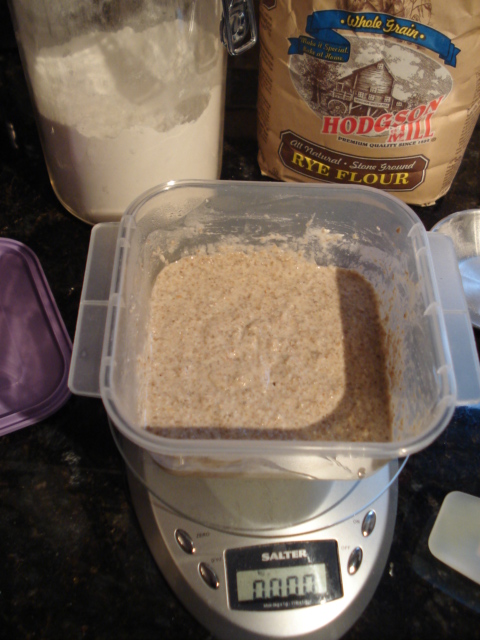 My directions came from Hamelman’s Bread once again, and I should mention that there are several different kinds of starters. I chose to make a liquid one with the water content 125% the amount of flour (by weight). Here’s what I started with:

I mixed these well, barely covered with a lid, and put in a warm place for 24 hours. You’ll notice I began the starter with rye flour but eventually I will turn to bread flour. Apparently rye (especially organic, whole-grain) has a lot more nutrients for the yeast to snack on. One side effect, though, is rye is very absorptive of water. Your initial mixture will be very thick, but by the end of the experiment, it will soften up, like a creamy soup. No problem, just something to be aware of.

Day two consisted of two feedings, the first one at the end of the initial 24 hours, and the second 12 hours after this. All feedings from now on begin with removing half of the culture from your container and then adding the new ingredients.  Stir until combined.  More on what to do with the removed half later.  The day-two feedings consist of: 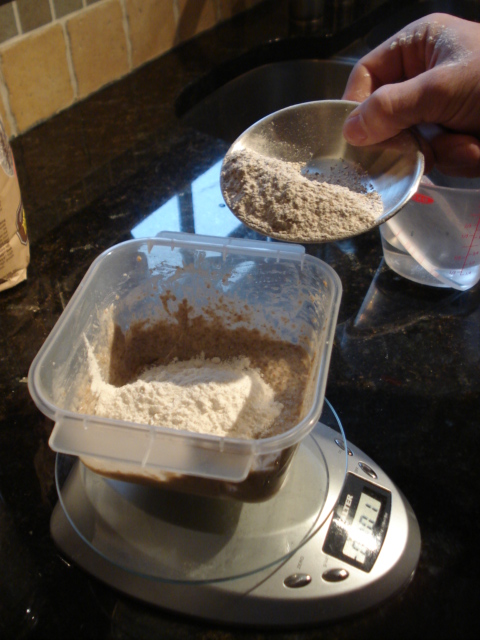 After these two feedings, we move into the final stage, which can last from 3 to 5 days, depending on how much effort you want to put into this. Each of these days, the culture receives two feedings, 12 hours apart, consisting of:

(If you want to know how much of a nerd I am, and how much I love numbers, here’s a link to the excel spreadsheet I made to keep track of the feedings: sourdough.xls)

So what’s going on here?

There are two main reasons this process takes so much time. First, and most obvious, it takes time to establish a favorable environment for the yeast to begin multiplying. Second, the development of acidity is much slower than the yeast production. In fact, you will notice the effects of the yeast before the effects of lactobacillus. After the second day or so, the mixture should show a large amount of bubbles (of carbon dioxide) as well as an increase in volume.

I mentioned earlier that there are two types of acid in sourdough – lactic (think yogurt) and acetic (think vinegar). According to my sources, the lactic acid development is quicker than acetic. This is a reason you may want to continue beyond the minimum 5 days of feeding. Nevertheless, in the early stages of growth, don’t be discouraged if your mixture doesn’t smell like classic sourdough. I’ll admit that I was a bit worried because mine had an extremely pungent aroma early on. On the fourth day, this subsided, and now it smells like fresh yogurt. Here’s a picture of some activity right before a feeding: 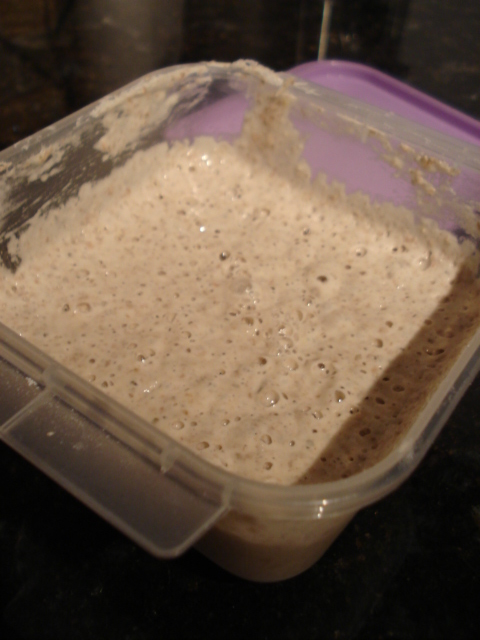 What about the portions you remove?

As you’ll remember, each feeding begins with removing half of the culture. The reason for this mostly has to do with storage. If we kept feeding a starter without removing anything, each feeding would have to be bigger and bigger because there are more yeast to feed. But this is one of those things that kills me: I hate throwing away food! So what I did was to keep all the removed portions in a container in the fridge. That would slow the development of the yeast in there during the 12 hour wait until the next batch. On the third day I made bread with it, and honestly, I wish I hadn’t. Remember how I said the culture was very pungent early on? Well big surprise, it made pungent bread. Here’s a picture (I added a bunch of whole-wheat flour, hence the grainy look): 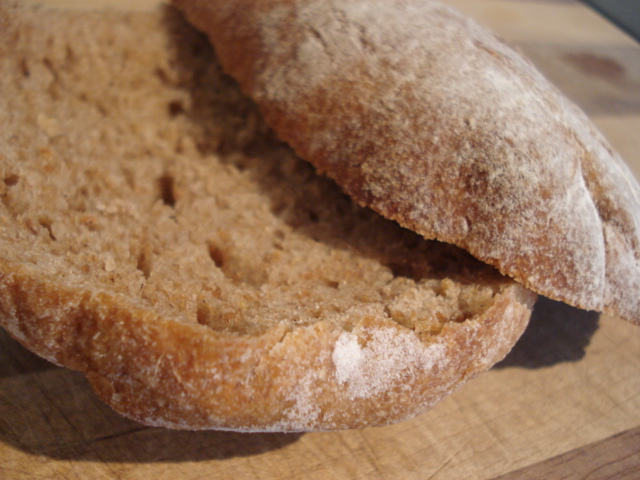 One last thing to mention: yeast thrive in temperatures in the approximate range of 70*-85* (though they don’t die until about 140*). We don’t want the temperature of the culture to be too high or they’ll be too active and consume all their food quickly. But too low won’t cultivate a healthy culture. Because it’s wintertime I was having a little trouble finding a spot in my house that consistently stays 70*. At first I would place the culture on the counter above the dish-washer while it ran overnight, because it gets the counters good n’ hot, but we don’t run it every night so that was only partially helpful. Also I tried putting it on top of the dryer while running, but same difficulties there. Finally I stumbled on the perfect solution: 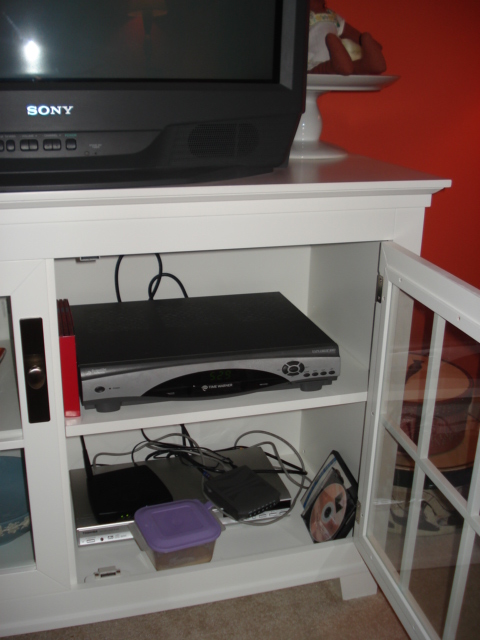 That dang cable box (top shelf) is so hot all the time! I used my kitchen thermometer to figure out how hot it was. The top shelf was about 85* – probably okay, but a little to high for my liking, so I measured the bottom – 71*. Money! So that’s where the culture was living for awhile. Hopefully you have a similarly warm spot in your house!

So I have a culture, how do I use it?

Well this is the part I need some more practice with before I can fairly answer> this question. First, there’s a debate on whether or not you should refrigerate your starter. Some say this does irreparable damage to the flavor, while others feel it’s fine. Unfortunately for us home bakers, we don’t have much of a choice: it’s either keep it at room temperature and feed it every day (what a waste of flour! sort of) or put it in the fridge and feed it maybe every week or two. I’m gonna go with the refrigeration.

Ideally, when you’re going to make bread, you’ll take a portion of your sourdough culture out of the fridge, mix it with a portion of the flour to be used in your bread (and some water), and let them sit together about 12-16 hours. This is just like making a pre-ferment. The yeast will wake up after being in cryo-freeze, and they’ll have a little snack. Lactobacillus will also propagate and lend its famous flavor to the pre-ferment. After waking everything up, bake your bread as normal. In some of my other bread recipes I’ve raved about the benefits of pre-ferments, and some people have likely skipped the step with fine results, but I can’t stress the importance of waking the sourdough starter up after taking it from the fridge. Technically, it IS in a dying state, but some time, a warm environment, and some food are enough to bring it back to normal.

Finally, how much starter to use in breads? Well…. I don’t know. I’ve seen some explanations that run counter to intuition, such as a smaller bit of starter contributed to the dough will give a stronger flavor than using a lot of starter. Guess I’ll just have to report back when I have some results! Until then, happy baking!