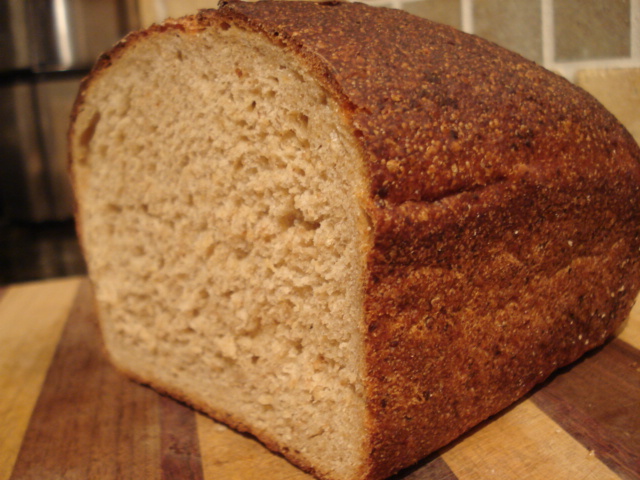 When someone says “Beer Bread” I think most people are referring to a batter-dough that’s leavened with baking powder/soda. This type of bread is more of a muffin-style rather than a yeasted bread. Well I’m not that crazy about using chemical leaveners – it feels like you’re cheating. But also, I need a bread that has some structure to it so it can be sliced for sandwiches, and batter-based breads don’t hold together as well. So I present to you this yeasted, kneaded beer bread. It will make your house smell like a brewery all day long.

I think the KERF readers will like this bread because there’s no pre-ferment – just dump, mix, and bake. Why no pre-ferment? The main purpose of a pre-ferment is to increase the acidity for added flavor, but I figured that the taste of beer is so strong, it would probably overshadow the subtle taste that the pre-ferment would lend. The other main reason for using pre-ferments in bread is because the increased acidity helps it keep longer (because bacteria and mold can’t tolerate very acidic environments) but I thought the beer itself is acidic enough, so check that off the list.

One final thing to think about is what kind of beer should you use? If you’re like me, your first reaction is to get the darkest, strongest beer you can find because you really want to show off the beer flavor in the final product. But I thought about this some more and did some reading online, and a lot of people led me to a few realizations:

For my first attempt at this recipe, I used an Amstel Light (by the way, this is just about the only light beer I think actually tastes good). It worked well for exactly the reasons mentioned above. However, my favorite type of beer is any IPA. I’m having reservations about using one to make beer bread, though. On the one hand, they have a very aromatic, flowery taste, but they are some of the most bitter beers out there. So for this recipe, I used this Eye of the Hawk ale. For being as high in alcohol as it is (8%) it’s a very smooth, honey-scented beer. I would compare it to a Killian’s: 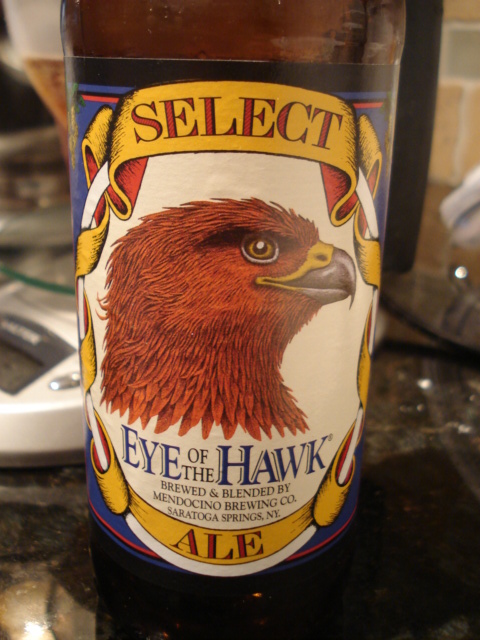 Now on to the recipe!

There are only two things to do for prep before adding to the mixer: First, the beer should at least be room temperature or lukewarm when you add it to the dough. If it were cold, the yeast activity would be slowed down. I took the beer out of the fridge, poured it in a microwave safe container, and gave it about 45 seconds on high. Also, I found that beers can vary between 340g and 360g. The difference isn’t really enough to be worried about, we just want to make sure the dough isn’t dry. 340g is the lowest I would go, and I doubt you’ll find a beer that weighs less than that. 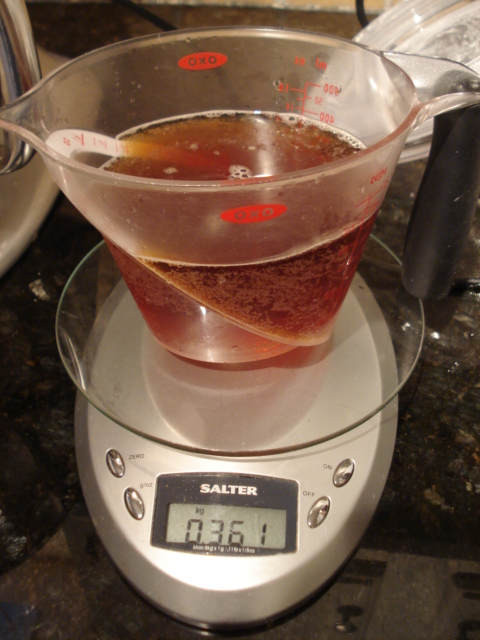 The second thing to do is toast the wheat germ. I gave it about 1.5 minutes over medium heat. Just keep it moving in the pan. Remove from the heat when you smell a strong, nutty, toasty flavor. 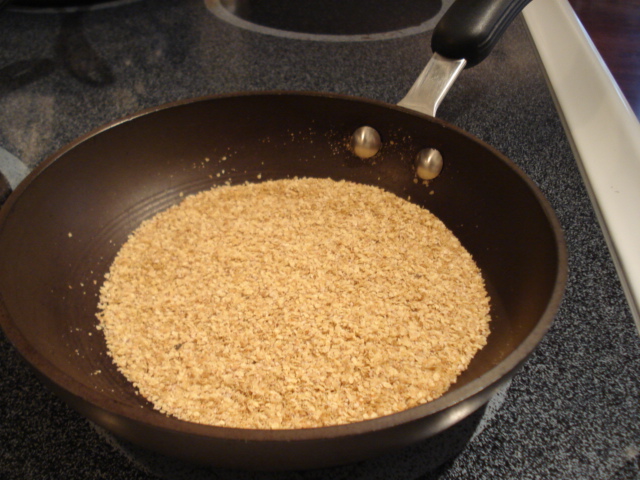 After you’ve done these two things, you can add all the ingredients to the mixer. Don’t worry about the beer foaming up. Mix on 1st speed for 3 minutes, and 2nd speed for 3 minutes. You may have to use a spatula to scrape the sides at some point. The dough will be fairly sticky, but firm.

I actually took it out and kneaded by hand for another 2 minutes. I have a new technique that I will be using for all my breads from now on. In past recipes, I frequently say things like “with well-floured hands, and a well-floured surface knead the dough…” but I had never been very comfortable using flour to guard against the dough sticking to everything. You see, adding more flour throws off the yeast, salt, and water ratios, even though in the grand scheme of things you’re not adding that much extra flour. Well my new technique is to use slightly wet hands to knead the dough. It will feel a little strange because the dough will be very slimy, but it definitely will not stick to anything. Furthermore, adding more water to the dough is a good thing – normally when dough rises, it loses a little water to evaporation (even when you have it covered). Using wet hands when kneading partly replaces that lost water. But also, the addition of water essentially means our bread will have more steam when it bakes, which means a more voluminous loaf! So I highly recommend using this technique – you just sprinkle water on your hands a few times during the kneading/folding. Just rub your hands together so there’s the faintest film of water on them.

Here’s the dough after mixing: 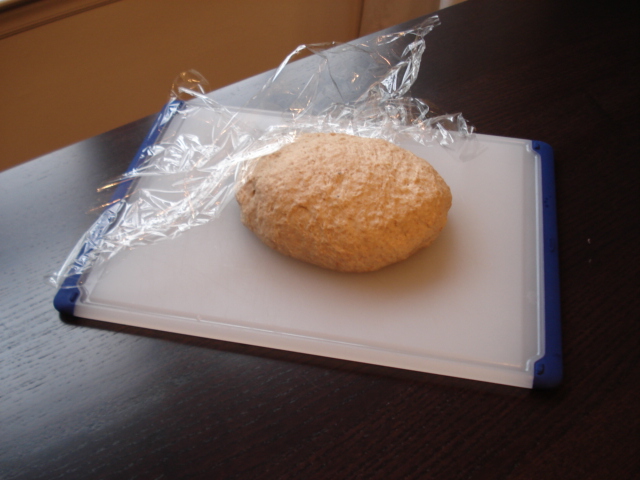 Set in a warm place and allow to rise for 2 hours, folding after 1 hour has passed.

After primary fermentation, shape the loaf (I went with a loaf-pan yet again). Allow to rise for 1 more hour, preheating the oven to 430* at the 30 minute mark.

Slash the loaf (I keep forgetting to do this!). Before placing oven, splash 1oz of water in the oven, and then bake for about 28 minutes, until the loaf takes on a dark color. Yum! 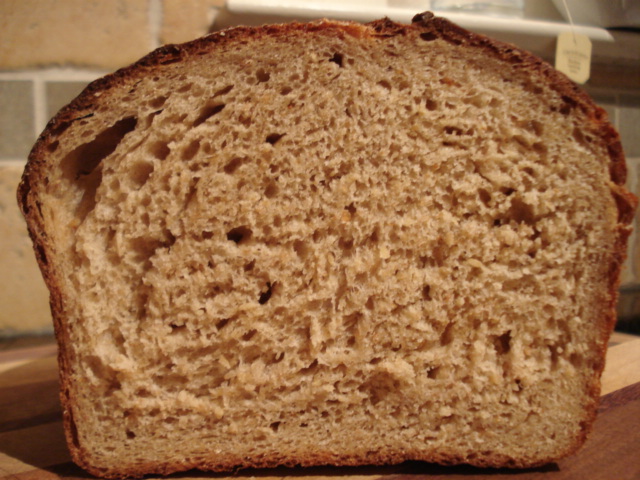