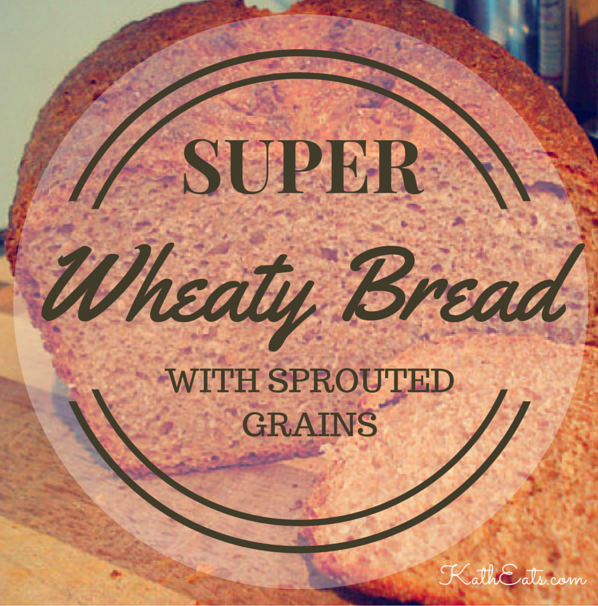 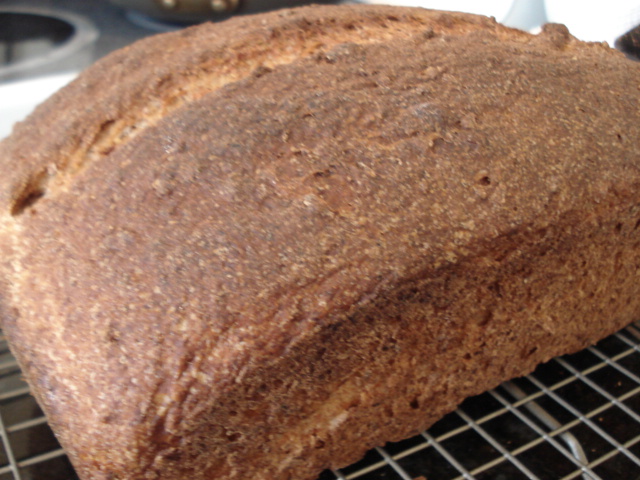 This is a deliciously dense and wheaty bread. I think it’s probably best suited to a long baguette that you would serve with dinner, rather than a sandwich loaf. Before I get into the recipe, lemme give a little background:

So I recently went to the library and checked out Peter Reinhart’s Whole Grain Breads. Reinhart and his books are often lauded for being a good teacher. I especially see his Bread Baker’s Apprentice (which I haven’t read) referenced as the best place for a completely novice baker to start. Whole Grain Breads was enjoyable, and I learned some very important techniques, but my overall criticism of the book is that it’s mostly a recipe book.

He has a very specific methodology to making whole grain breads, but I don’t think he explains it well enough to the reader. As you can guess, I want to know everything behind the recipe so that I can transfer that knowledge to other recipes. Unfortunately, Reinhart’s recipes fall victim to something he criticizes himself in the beginning of the book when describing his path to becoming a baker: “I asked lots of questions of the young, long-haired bakers, but none of them really knew much about bread other than how to follow procedures handed down from the long-haired bakers they’d replaced. ‘If you follow these steps and make a few adjustments for the weather, it usually turns out pretty good’ was the general attitude.” After reading the book a couple times, and reading some of the key recipes many, many times, I finally realized something very important:

If Hamelman’s book is all about understanding the ratio of flour to water, then this book is about enzymatic activity. If you’ve been reading my other recipes and comments on the blog, you’ll have noticed that I haven’t made too many 100% whole grain breads. This is mostly because my main purpose of baking bread is to make sandwiches, and I like sandwich bread to be fluffy, for both texture and caloric reasons. The problem with whole grain breads is the addition of hard particles that rip holes in the gluten and prevent a more voluminous rise. See Bread Experiment #1 for more details here.

Well Reinhart has a brilliant solution here: most bread bakers (me included) make their bread in two stages: on day 1 they build a pre-ferment (sometimes containing sourdough) and on day 2 they combine the pre-ferment with more flour, water, and other miscellaneous ingredients. Reinhart’s method is to take advantage of that water that would normally be added on the second day. So what he does is build a pre-ferment in one container, and in a second container he builds a soaker. A soaker doesn’t really have an exact definition in bread making, so for his purposes, he designates any mixture that has flour and water but NO yeast as a soaker. The reason I think using a soaker is genius is:

I will admit that I was impressed with the effects the soaker had on this bread. When I would come to check on it during primary fermentation, I was surprised how much it had risen. This was definitely not the whole wheat bricks with which I’m way too familiar. However, it was still too dense for sandwich making.

The other cool thing I learned from this book is how to sprout grains. Why would we want to sprout a grain? Once again it’s all about the enzymes. Soaking means more simple sugars, but in this case we’re not just doing it for the yeast, it’s for our benefit too: it tastes sweeter! So on with the recipe:

This is a three day process, but don’t be intimidated – day 1 and 2 don’t require much effort.

Today we begin the sprouting process. Kath bought me some hard winter wheat berries from Earthfare – they look like just about every other grain you’ve seen. I placed 6oz (just under 1C) of wheat berries in a plastic container and covered them with 12oz of water. 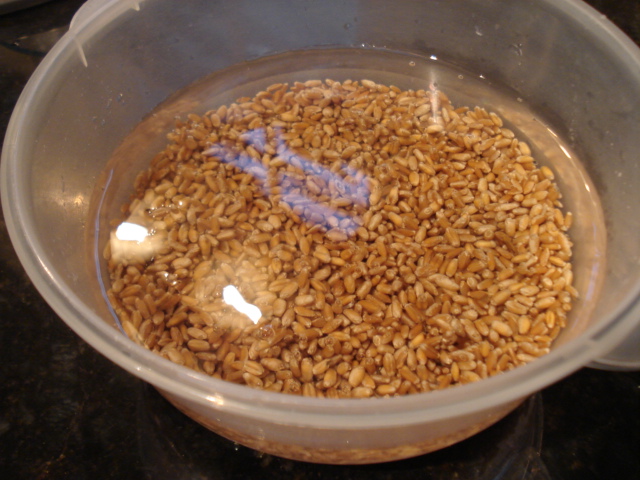 Let this rest at room temperature for 12-24hrs.

There are three things to do on Day 2. First we have to drain the wheat berries. You’ll notice that the water is quite brown, and when I took a whiff, it smelled surprisingly fermented. Reinhart tells you to use this drained water when you make your bread (which is what I did), or drink it (it tasted like flat, weak beer), or water your plants with it – lots o’ nutrients. 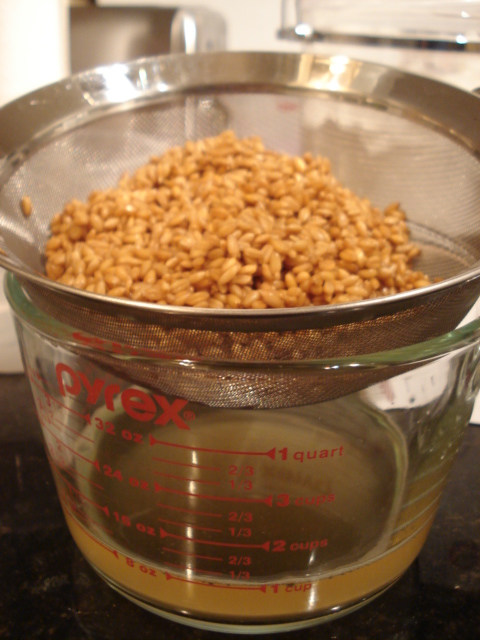 After soaking, the 6oz of wheat berries weighed 10oz. Give ’em a rinse and put them back in the container. Let it sit at room temperature for another 12 hours.

The second thing we have to do is construct our pre-ferment. Pretty typical procedure here, just stir until combined and knead just until everything is incorporated and then let sit for 12 hours at room temperature:

The third thing to construct is the soaker. Stir until combined, knead until evenly incorporated, and rest for 12 hours at room temperature:

You’ll know that the wheat berries have sprouted because they’ll have a little “tail” sticking out of one end: 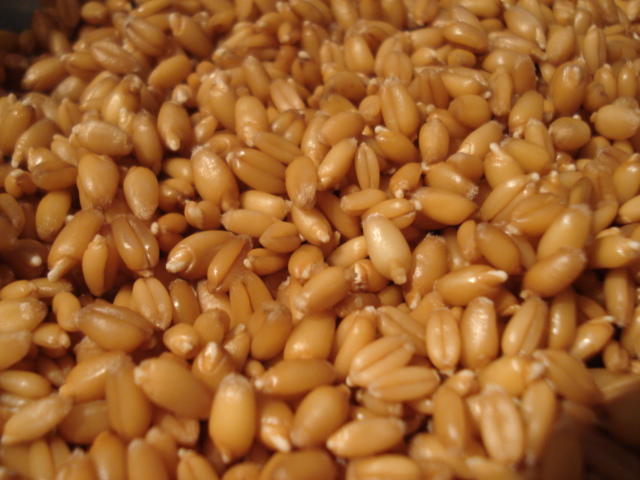 I actually think that next time I’ll extend the second phase from 12 to 24 hours so they’ll be a little more sprouted. This should make them a little sweeter. Now you have to run them through a food processor. You can really pulverize ’em if you want, but make sure you don’t go so long that you generate heat. I went for a coarse chop (which was still about a combined full minute of processing): 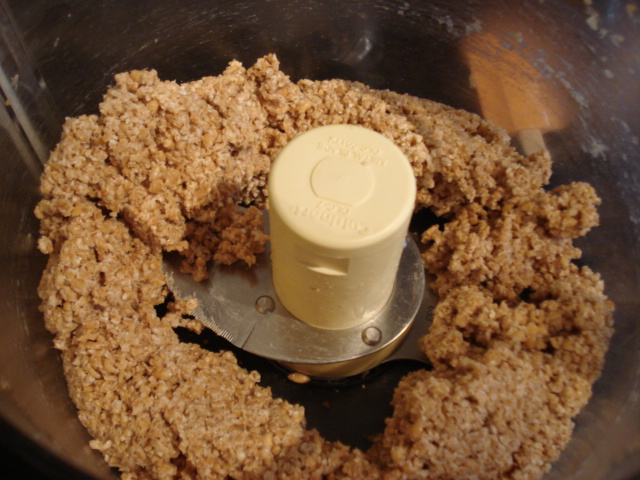 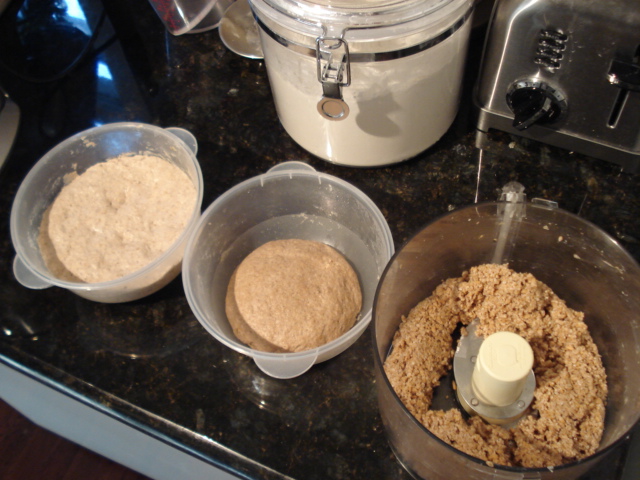 It’s a bit strange adding stuff to the mixer because there’s no water. I’m so used to seeing my flour swimming in a pool of water, and it made me a little nervous that the dough wouldn’t come together correctly. I started by taking chunks of each of the three containers above and adding them randomly: 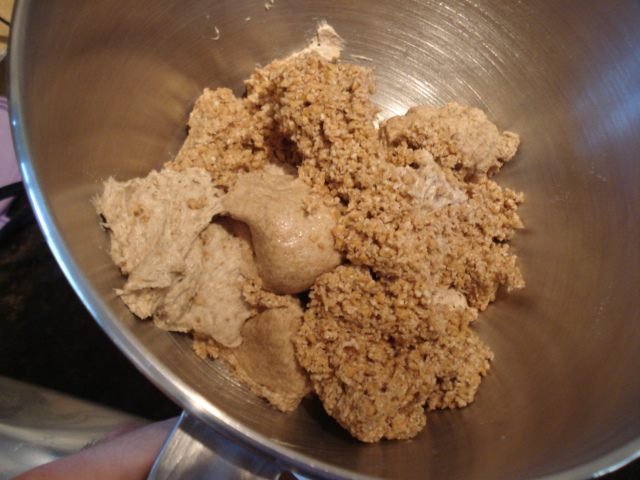 On top of that I added:

I used the mixer to bring everything together, but it seemed to be straining against all that dense dough, so I ended up mixing by hand. Here’s what the final mixed dough looked like: 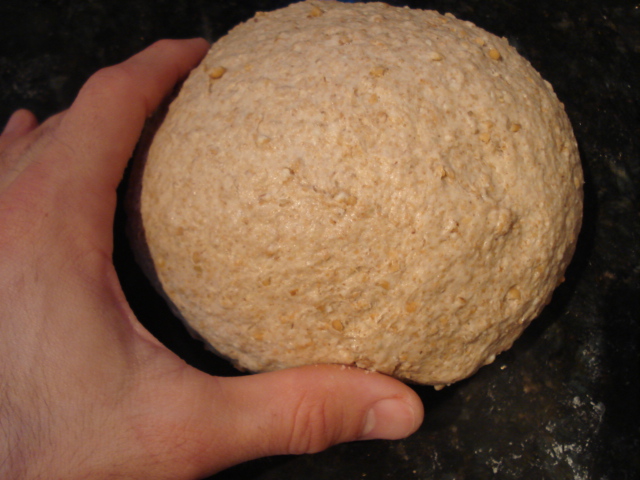 It’s kinda crazy how small it was, though it’s worth mentioning that this recipe has less flour than my usual recipes. Typically I put 500g of flour in a bread, but I thought that since I was adding all that sprouted grain, I would need less. After all, there are recipes out there that have 100% sprouted grain. So I used 400g of flour in this recipe, which is why the dough ball looks so tiny.

From here on, it’s pretty standard break making. Allow to rise for 2 hours, folding after the first hour.

After the second hour, fold again and place in a loaf pan (or whatever shape you want). Allow to rise for 1 more hour, beginning to preheat the oven to 450* after 30 minutes.

Slash loaf, splash the oven with 1oz water, and bake for about 25 minutes until very dark brown. Enjoy! 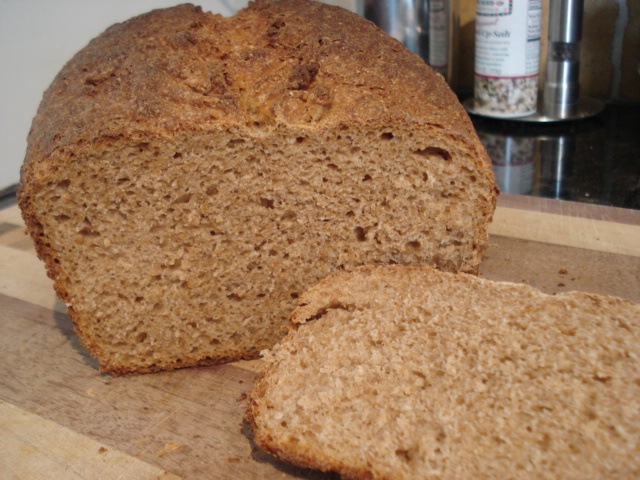